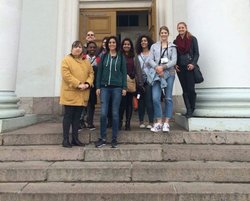 In early summer, 22 MA students in the Global Affairs Programs spent two weeks in Sweden and Finland as part of the GLOA 710 Seminar Abroad. This was the first time GLOA 710 has covered northern Europe – previous trips have been to Cuba, Mexico, South Africa, etc. The focus of the trip was European security, broadly understood. The group visited the universities of Uppsala and Stockholm as well as Sweden’s National Defense University, attended briefings by prominent think tanks such as the Stockholm Institute for International Peace Research and international organizations such as the Council of Baltic Sea States, and met with government agencies such as the Ministry of Foreign Affairs and the Swedish Defense Research Agency.

One of the students, Brehima Camara, described the seminar abroad as giving an “excellent academic perspective” on the many challenges facing Europe today, including the very viability of the European Union. Mr. Camara added that “the fact that we were exposed to many of the think tanks in Sweden helped me better understand the different dynamics currently at play not only in Sweden but in Europe as a whole.”