The United States has recognized black history annually beginning in 1926, first as “Negro History Week” and it has officially been celebrated as “Black History Month” since 1976. Dr. Carter G. Woodson, the founder, created the week initially in honor of Frederick Douglass’ and Abraham Lincoln’s birthdays which were in February. Mason has continued the legacy of Dr. Carter’s initiatives and holds several Black History Month events that are both educational and inspirational, and inclusive of the entire Mason Nation! 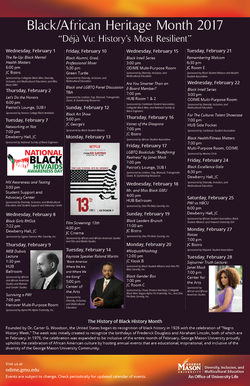