Honors in the Major students share their experience at NCUR

My favorite part about the conference was that I was able to experience it with 3 of my fellow honors classmates. It was a lot of fun to be able to assist to a variety of presentations on so many topics, and to discover another city in the U.S.

Outstanding global affairs majors pursue an Honors in the Major distinction by taking GLOA 491 and 492, our research project courses. Taught by Dr. Niklas Hultin, this year’s global affairs Honors in the Major students learned how to design and implement their own research projects focusing on a global issue of their choice. During the academic year, students not only gain the knowledge, skills, and abilities required to conduct research and analyze their evidence, but also to transform that analysis into meaningful reports and present it in a public setting.

This spring, several global affairs majors traveled to the National Conference on Undergraduate Research (NCUR) in Tennessee to present the results of their projects. Selena Batchily and Phoebe Lemon, global affairs majors with concentrations in international development, shared their experience at the NCUR.

Selena Batchily’s project addressed the impact of regional integration, specifically focusing on the Economic Community of West African States (ECOWAS) and the Nigerian economy. She participated in the poster presentation session at NCUR and was grateful for the way in which GLOA 491 and 492 prepared her for the conference. “The course prepared me for the conference very easily, due to the breakdown sessions on writing different parts of my research and on getting feedback from both my professor and the other honors students,” Selena said upon returning from Tennessee.

She also benefited from consulting directly with Dr. Hultin about what elements to include on her poster and giving her classmates a preview of her presentation. Selena noted that being “able to showcase my poster few days before going to Memphis which was definitely a plus.” The camaraderie built between Selena and her Honors in the Major classmates also made the NCUR more meaningful. “My favorite part about the conference was that I was able to experience it with 3 of my fellow honors classmates,” she said, “it was a lot of fun to be able to assist to a variety of presentations on so many topics and to discover another city in the U.S.”

Phoebe Lemon presented the results of her research project on the nationalization of Buddhism in Myanmar through law and policy. During her research, Phoebe analyzed how certain laws are used to suppress religious minorities and protect Buddhist nationalists in the Southeast Asian nation-state. Phoebe benefited from the “extensive feedback and guidance” she received in GLOA 491 and 492 in each step of her research project. “I was able to confidently present a polished research project,” Phoebe said of her experience at NCUR. As confidence and polish are two key elements in conveying the importance of research, Phoebe’s presentation is just one example of how the global affairs Honors in the Major courses teach skills that translate into real world experiences! 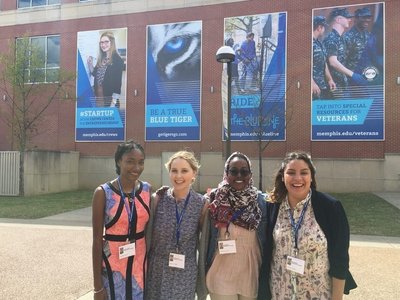 In addition to sharing her own research, Phoebe also enjoyed the opportunity to connect with colleagues, both at Mason and at other institutions. She benefited from the feedback and insights of other researchers about her own project and also enjoyed learning about others’ original research projects. Phoebe’s experience at the NCUR was a rewarding one on several fronts, not the least of which was interacting with colleagues who share her passion for research.