A Conversation with Helon Habila: Boko Haram, Insurgency, and Nigeria

"You can’t have democracy without education." 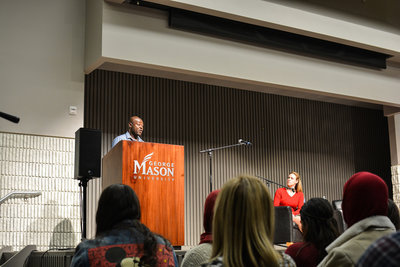 In May of this year, 82 of the schoolgirls kidnapped by Boko Haram in 2014 from the town of Chibok in Borno State, Nigeria, were returned as part of a prisoner exchange with the Nigerian government. Their return is a cause for celebration both in Nigeria and further abroad, but more than 100 of the 274 girls kidnapped in 2014 remain missing. It is also a reminder that the Chibok kidnappings are part of an ongoing story, one that Professor Helon Habila has researched first hand. In October, Professor Habila sat down with students, faculty, and members of the Mason community to talk about The Chibok Girls Kidnappings: Boko Haram and Islamist Militancy in Nigeria, his account of the tragedy and its aftermath.

Habila returned to his native Nigeria in the months following the kidnapping to investigate its effects not only on the girls’ families, but also on the town of Chibok. What he found was a community heartbroken by loss, but one that was also confronting the complex daily realities economic hardship, political corruption, the lingering specter of Boko Haram. The lack of consistent and meaningful government response to Boko Haram in the last decade has left not just Chibok, but many towns in the region, in the precarious position of trying to bring social and economic security to their community in the midst of a decidedly insecure atmosphere.

The issue of education was central to the kidnappings and is a key feature of Boko Haram’s mission. Boko Haram targeted the girls at the Chibok Secondary School because of its anti-Western education stance, which it itself rooted in an extreme Salafist interpretation of Islamic theology and law. But the existing lack of education in Borno State also helped give rise to the group in the first place. Chibok is in northeastern Nigeria, which Habila characterized as one of “poorest and least educated” parts of the country. In the past 15 years Boko Haram has increased its membership significantly by recruiting uneducated, economically downtrodden, and increasingly desperate young boys in the area. 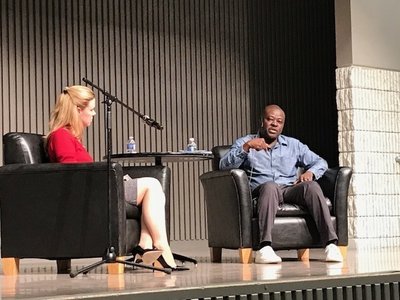 “Some of the reasons that brought about the rise of Boko Haram are not just religion and ideology. It’s also politics and economic factors,” Habila said. “The northeastern part of the country… has always been behind in economic development. Then you add this religious dimension to it and things just exploded. But there’s so much [governmental] corruption. There’s money in the country, but the government doesn’t really use the money to help the people.”

The goal of increasing levels of education in northeastern Nigeria is complicated by the fact that the extremist group’s targeting of schools, teachers, and schoolchildren has made it difficult to encourage young people to go to school in Boko Haram-threatened areas. “Before you can convince kids to go back to school it’s going to take time because of that trauma,” Habila observed, but he remains steadfast in his belief that education is ultimately the key to many of Nigeria’s problems. “You can’t have democracy without education,” he added. 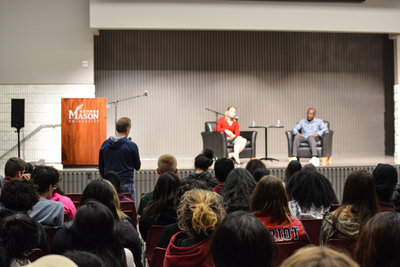 While it’s been over 3 years since the girls were kidnapped from school in Chibok, their story is far from over. Over 100 of the girls remain unaccounted for, and the ones who have returned bear the indelible marks of their time in captivity. Habila was intent on telling the story soon after the initial kidnapping, which is why he purposefully decided to make his first foray into non-fiction with The Chibok Girls. “Non-fiction has its own way [of addressing things],” Habila said, “Non-fiction is more unambiguous, it’s more direct, it’s more fact-based, and so I think it’s better in the short term.” He remains adamant that there is more to be told in the future, and that after more time has passed a fictionalized account of at least part of the ordeal may be a powerful way to convey the complexity of the Chibok girls’ story.

“Fiction works in a different way… what fiction does is work to go beyond the headlines and look at character, and try to understand what might have led some people to become who they became,” said Habila. “[Fiction] tries to make the reader imagine himself in the place of these people—to try to dramatize it and to create empathy. That’s what fiction does best… it makes the reader begin to think about how the terrorists would think and the how victims would think; it [makes] things more complex and shows you that there aren’t easy answers.”