"My Heart is in Havana"

During the 2018 Winter break, 25 Mason students traveled to Havana, Cuba, with Professor Lisa Breglia for a two-week program focusing on Cuban political economy. Students studied the new Cuban economic model, its strategies for attracting foreign investment, and its plans for integrating into the global economy. At the same time, students of global affairs, government, and economics were submerged in the tides of life in Havana, one of the world’s most exciting and unusual cities.

Many foreigners readily associate Havana with communism, cigars, and classic American cars. However, two weeks of intensive classes at the University of Havana’s Centro de Investigaciones de Economia Internacional (CIEI) taught Mason students that Cuba is a complex, multifaceted country. From a multidisciplinary perspective, lecturers discussed Cuba’s work to find its footing in a shifting geopolitical and global economic landscape in a global atmosphere often hostile to the island nation, how Cuban families have struggled and redefined themselves and their gender roles, how Cuba has used uncommon methods of international diplomacy to forge new relations between nations, and how Cuba is making inroads with new technologies in hopes of opening new markets. Historically, the tides have turned on Cuba time and again as they have struggled to become an accepted, independent modern nation-state. 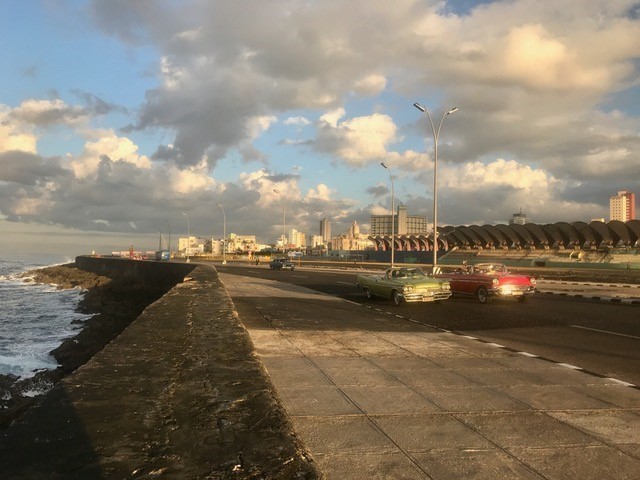 While not in the classroom, students had the opportunity to explore freely in and around the coastal city. In addition to enjoying the many sites, landmarks, and museums around the city, the students visited with community groups, entrepreneurs, and consulting firms. They had the opportunity to dive into the deeps of Havanero culture. The currents took them from colonial ceremonies to modern seaside salsa clubs, from local markets to international jazz festivals, and from the ballet to baseball. Students also took a day-trip to San Diego de los Baños, a rural community in the province of Pinar del Rio, in order to gain a perspective on the ebb and flow of daily life in Cuba’s countryside. The visit included the opportunity to meet and have lunch with a local family, and hike the cave-riddled riverside.

Living and learning in scenic Havana was “the opportunity of a lifetime,” a student said. It triggered self-reflection and a more real awareness of varying viewpoints: “Grasping the Cuban desire for domestic opportunity and stability revolutionized my perspectives on US-Cuban relations. The importance of cultural understanding and personal relationships as an informant of policy decisions cannot be overstated. In the end, we all want the same things. They are not ‘they’ – they are ‘us.’”