"I think news reporting is critical to challenge and monitor political power. It is also a great bridge to build understanding for key issues surrounding conflict and crisis around the world in places most people can’t see firsthand."

Last week, George Mason University welcomed Louie Palu, a documentary photographer and a Bernard L. Schwartz Fellow with the New America Foundation, for a week's worth of speaking engagements. Palu is well known for his work in Kandahar, Afghanistan and Guantanamo Bay, Cuba, and he is currently working on a photography project along the US-Mexico border.

He spoke to four separate classes and was a member of the "Covering Global Conflict Panel," which took place on Monday, March 4, 2013 at 7:30 p.m.

Palu's work has appeared in numerous galleries and archives, including the Portland Art Museum, the National Gallery of Canada and the Library of the U.S. Marine Corps, Archives and Special Collections Branch. His work has been featured in publications all around the world, such as The New Yorker, TIME and Newsweek. Palu has won numerous awards, including a National Magazine Award, a Picture of the Year International designation, the Best of Photojournalism Award from the National Press Photographers Association, the Silver Medal from the Society of Newspaper Design and multiple awards from the White House News Photographers Association.

The College of Humanities and Social Sciences caught up with Palu for a quick interview:

Why isn't the average citizen familiar with places such as Afghanistan or Mexico on a detailed level?

Well, what I would say is that those relying on popular media aren’t fully familiar with the fundamental issues in Afghanistan and Mexico I believe everyone needs to be aware of. There are plenty of traditional platforms that serve as springboards for great journalism out there. The problem is that the important research and stories get buried on the Internet because there is just too much to sift through. They also are lost to popular stories in the West such as celebrities and entertainment subjects. The Internet is great. However, on the downside, it can create a fog with too much content, making some key stories hard to distribute, deliver and have read or seen.

What types of things have you seen there that go unreported in traditional news media?

I don’t think there can ever be enough stories on the abuse of or killing of journalists. If the number of journalists being killed in Mexico happened in the United States, it would be front page news and there would be a massive outcry. There can also never be enough stories on poverty and social infrastructure. One stat I heard on Mexico, which shocked me, is that only a few years ago, only 38 percent of police in Mexico had their high school education. Many of the Afghan soldiers I met in Kandahar over the years could not read, but they could operate an assault rifle. Those are critical yet simple factors to consider when trying to understand some of the fundamental problems governments need to solve to serve their citizens.

Not only do you examine these areas around the world, but you do so long-term. Why is it important to place an extended focus on these areas?

I think news reporting is critical to challenge and monitor political power. It is also a great bridge to build understanding for key issues surrounding conflict and crisis around the world in places most people can’t see firsthand. Long-term projects are like a relationship with a person. The longer you are with them, the better you get to know them and the more important in-depth details you learn about them. They are both important. The one alarming issue I foresee in the future is the continual erosion of financial support for foreign bureaus around the world. Imagine waking up and not hearing the BBC World News Service on the radio or Internet or no New York Times reporting, using the models of foreign reporting they are so well known for.

Why is it important for a college-age audience to know about the type of work you do and the issues you cover?

University- and college-level students are a special demographic that will be a part of some of the future leaders and governments of our countries. They must understand the key dialogues that make up our foreign and domestic policies. They will one day be policymakers and journalists, and are already voters who need to be connected directly to the issues at hand that we are all a part of, so they understand what and who they are voting for.

What did you do during your recent visit to George Mason University?

I was part of a panel discussion on conflict reporting at Mason before the classes and workshops I just did at Mason. I designed my workshop/lecture with each class to be participatory, and I did four in total. The workshops had an interactive element in which students edited a newspaper with a story on Mexico which covered many topics, such as human rights, media, governance, economics and illegal drugs. Small classes are more intimate and connect the students to me much better than one large lecture hall with hundreds of students. It was more a setting for a dialogue between all of us rather than a one-way lecture monologue from me where I talk and they listen, which is limited in my mind.

Where can we currently see your work, and what is next on your to-do-list?

You can see most of my work on my website:

You can also search online any number of topics with my name. The best would be to do an online search with my name and use “Mexico,” “Kandahar” or “Afghanistan.” Many hits will come up. I use social media to post some of my activities. You can be connected via Twitter @loupalu or on my Facebook artist page “Louie Palu Photographer."

I am still currently focused on Mexico's organized crime and border related issues. I am also editing a book and documentary film on Kandahar, Afghanistan. 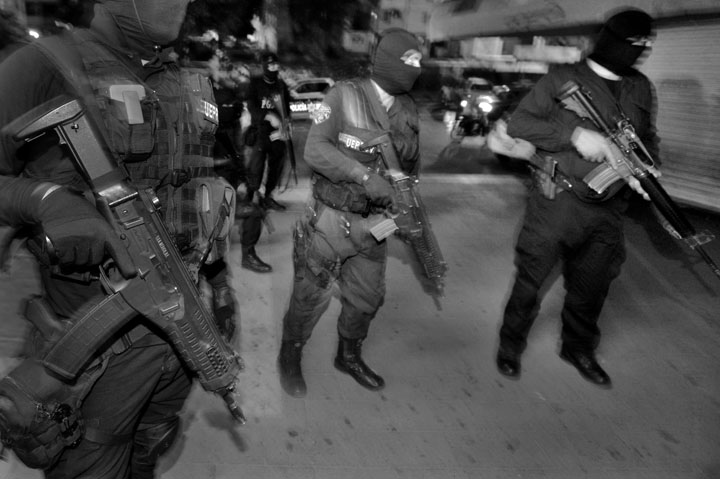