Mason will start the fall semester as scheduled on Monday, August 24, with a mix of in-person instruction, expanded online classes, and research activities. Visit Mason’s Safe Return to Campus Plan.

Permanent Observer of Palestine, His Excellency Dr. Mansour to Speak 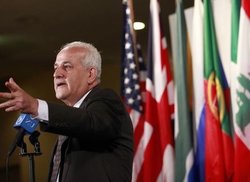 On Thursday, February 16th, Dr. Mansour will speak to the Mason community on  the status of negotiations between Palestine and Israel, as well as the status of efforts of Palestine at the United Nations regarding admission as a Member State.

In 1983 Dr. Mansour joined the Permanent Observer Mission of the Palestine Liberation Organization (PLO) to the UN as Deputy Permanent Observer. He represented Palestine in several committees and bodies of the UN. In 1994, he joined private life and accepted a position as Vice-President for Intram Investments, Inc. in Orlando, Florida. While at Intram, Dr. Mansour was responsible for representing the company in governmental relationships and  key strategist for land acquisition for developmental projects. Dr. Mansour was also consultant with Laventhal and Slaughter and adjunct Professor, Political Science Department, at the University of Central Florida in 2002. In 2005 he was appointed Ambassador and Permanent Observer of Palestine to the United Nations. Dr. Mansour is also the non-resident Ambassador of Palestine to Costa Rica and the Dominican Republic.

*Please note seating is first-come, first-served. RSVPing does not guarantee a seat in the Cinema.*